What salary can you expect in South Africa?

French people who are looking for a local employment contract in South Africa should often low their salary expectancies, as South African wages are in average much lower than French ones.

But do not worry! The cost of life follows this rule as well, especially when you compare it to a city like Paris.

South African median employee earning is R2800 a month (you can divide approximately by 10 to have the euro equivalent) and the average earning is around R8500. These figures, found in SA statistics, are unlikely to concern directly potential French immigrants. Indeed, they reflect the huge gap in the South African society with a large proportion of the population under poverty line that doesn’t have the same opportunities for employment than you may have.

However, even for employees with a tertiary degree (“diplome de l’enseignement secondaire”), wages remain relatively low [cf. the following table from the 2010 government statistic report on SA earnings, monthly earning per employee].

So in the end, what can you really expect? It’s the question I asked to myself when I Started looking for a job in South Africa.

You can approximately divide your salary expectations by two in comparison to France even though it depends obviously on the sector and on your profile as well. Many websites make salary surveys and benchmarks. They can help you see what wage you can expect. Here are examples of salary difference you can see between France and South Africa, that I found on such salary Benchmark websites: 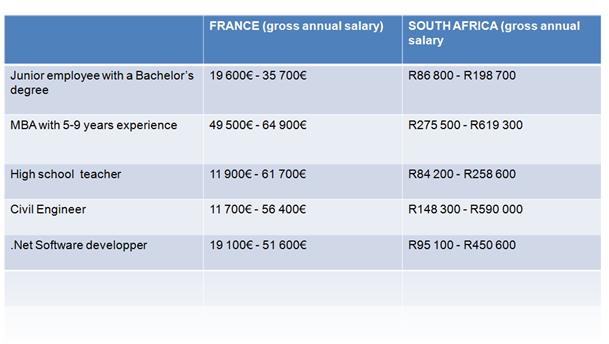 Besides, remember that wages in Western Cape are in average much lower than in Johannesburg (30-50% less). It’s the same syndrome than between Paris and the French “Province”.  Keep also in mind that, as a foreigner, you won’t help your employer to obtain any BEE (Black Economic Empowerment) point. Then, recruiting you can also be difficult regarding the work permit issue.

These two last points can make it difficult to negotiate the best salary. The best advice I can give you is to bank on what differentiate you from the local labor market: language skills, knowledge of French market, skills difficult to find in SA, etc.

Do not hesitate to bring your input on this issue! :-)

Replies to This Discussion

Permalink Reply by Nicolas ROLLAND on January 31, 2013 at 11:14pm
Generally one can expect a drop of salary level from Joburg to cape town of as much as 20%.

Would you say that there is a commensurate drop in rental prices? I ask because my perception is that there is a shortage of rental accommodation in Cape Town and I was wondering if the supply-demand situation here might skew what would otherwise be a linear relationship of salary - rental.

Generally one can expect a drop of salary level from Joburg to cape town of as much as 20%.

Not really but it is sometimes argued that the better life style makes up for the difference, joined with less jobs available. Note: the difference applies mainly to senior/executive levels and less for other levels, and also depending on the industry concerned.